Damage as a result of Chilling Injury can occur when fruit is kept below a critical temperature during transport or storage. This physiological disorder is behind many of the at destination claims that exporters suffer from their clients when shipping long distance. Citrosol, the Valencian company, with its CI-CONTROL coatings has designed and developed a new strategy to mitigate chilling injury, obtaining results similar to those using the active ingredient Tiabendazole.

The symptomatology of chilling injury is a collapse of the skin cells that affects many classes of fruit, especially citrus and other fruits of tropical and subtropical origin, in refrigerated storage or transport between 0ºC and 13ºC. Over time, the affected parts acquire a brown color, or suffer “pitting”. In the photographs below you can see the typical appearance of chilling injury marking on oranges. 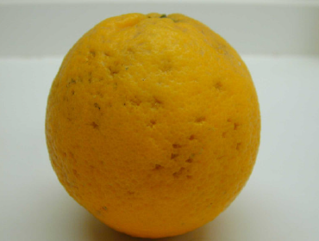 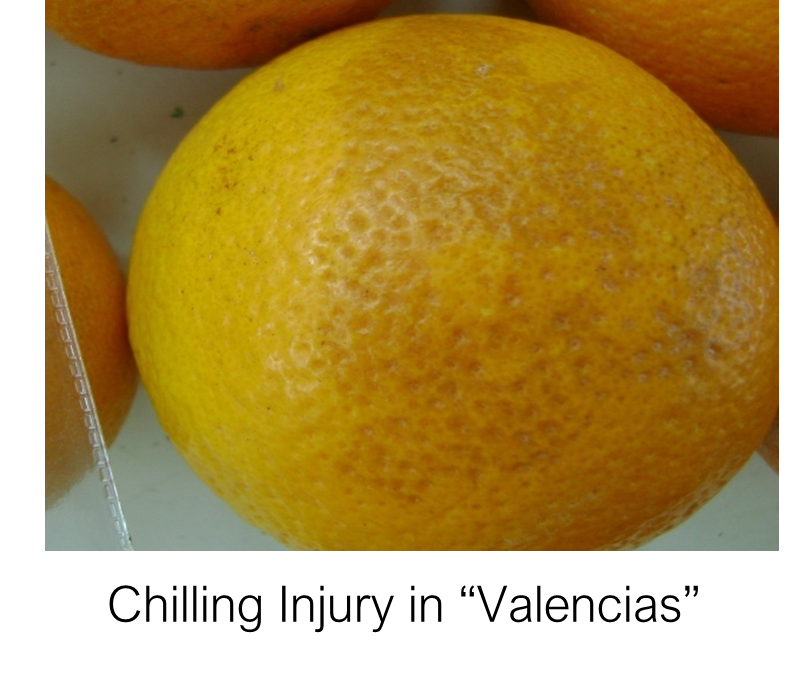 “In some coatings we have improved the properties of the formulations where we have managed to integrate CI-CONTROL (CIC) functionality, such as Citrosol Sunseal® UE and Sunseal® Extra UE, Plantseal® and Plantseal® Shine-free, Citrosol A and AK Camara UE, and Citrosol AK UE, attaining high levels of efficacy in reducing marking caused by Chilling Injury in prolonged refrigerated shipments of citrus fruit”, outlined Benito Orihuel.

In tests undertaken, we can observe, as in graph 1, that there is no significant difference between the Citrosol Sunseal coating in its CIC formulation and the same wax reinforced with Tiabendazole.

The same occurs in graph 2, where we obtain the same results using the Plantseal coating in CIC formulation and Plantseal with added Thiabendazole. 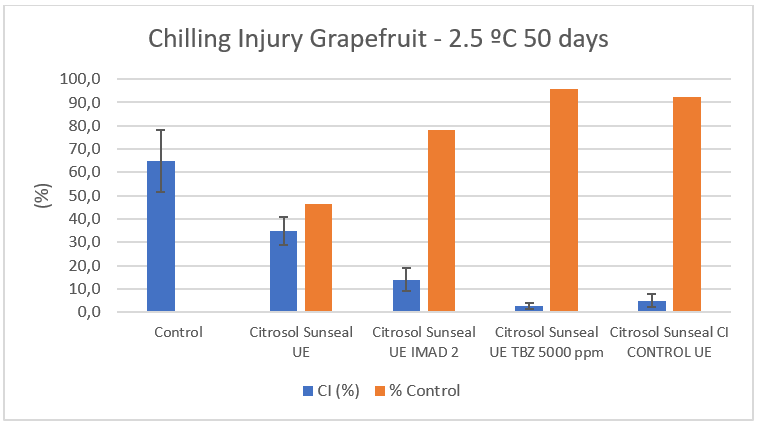 Trial using grapefruit in cold storage at 2.5 ºC for 44 days and 6 days in Commercial Life Test, total 50 days. It can be seen that the level of control that we achieve with Citrosol Sunseal CI-CONTROL UE exceeds 90%, very similar to that obtained when we supplement this wax with 5000 ppm of Thiabendazole. 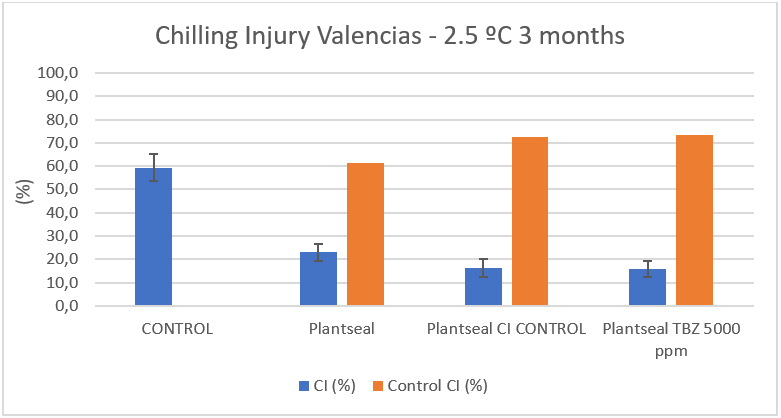 Test with Valencias in cold storage at 2.5ºC for 90 days and 4 days in Commercial Life Test, total 94 days.

The CIC (CI-Control) formulations correspond to a strategy we have designed to be both effective and differentiating for our clients, producers and exporters who have to respond to the current distribution demand that calls for an ever increasing limitation on the use of active ingredients. So, achieving the same efficacy without an additional active ingredient is a substantial step forward for the citrus fruit trade.

The temperature/time binomial is the most important triggering factor; but the intensity of the marking also depends on other factors such as the variety, the position of the fruit on the tree or the condensation of water (or humidity) on the skin of the fruit. There is even some scientific work which indicates that Fruit that has not been cold on the tree is more susceptible to cold damage in storage or transport. When the chamber fans are activated there may be a sudden and rapid evaporation of the water that causes a cooling on the surface of the fruit which, added to the low temperature of the chamber, can precipitate an excessively marked drop in the temperature of the fruit’s skin. To minimize and control this problem, good management of the refrigeration temperature is necessary, dependent on the variety. In addition, the storage chambers must be kept in optimal conditions to avoid condensation and other derived problems.

But to that “good management” we must also add the use of coatings, which generally reduce chilling injury, although their results may vary markedly. The choice of coating is critical; those produced by Citrosol, with our CI-CONTROL formulations, reach the highest levels of efficacy in the entire market. They will avoid significant losses, especially in citrus shipments that must comply with quarantine protocols.

Citrosol, finalist for the CEPYME SME of the Year Awards

Citrosol is a Valencian company, located in Potríes, specializing in research, development, implementation and commercialization of post-harvest technology and treatments to maintain the quality and freshness of fruit and vegetable produce. More than 50 years of experience have seen Citrosol establish itself as the benchmark within the post-harvest sector, allowing long transport periods between harvest and consumption, reducing environmental costs and guaranteeing food safety.

CITROSOL is pleased to invite you to our three postharvest webinars that will take place: 1st on January 14, 2nd on January 21 and 3rd on February 4 in South Africa and Australia.

Citrosol: solving the problem of Propiconazole residues on fruit

Over the last 8-9 years, Propiconazole has been widely used in the postharvest treatment of citrus fruit, although, thanks to our Vertido Cero® technology, we have not needed to include it in Citrosol treatments. Citrosol developed a methodology which avoids the problem of Propiconazole residues that are becoming manifest in the packing houses that have been using it.