In the current Covid era, meetings, seminars and conferences are having to adapt to the new digital formats. Citrosol recently played the starring role in an international webinar in which we explained and demonstrated to producers and exporters, two new post-harvest tools that will undoubtedly aid the marketing of avocado right around the world.

A few days ago, Peru ProHass, the Peruvian association of avocado producers, invited Citrosol to present our new postharvest solutions, used in the export of avocados, through a webinar entitled “Advanced postharvest solutions for the avocado”. It was hosted by Dr. Martín Mottura, the Precision Postharvest Manager at Citrosol, who presented the Citrocide® Avocado System; and Raúl Perelló, International Operations Director at Citrosol, who introduced the new Citrosol® A K Palta coating that mitigates weight loss and reduces pulp blackening caused by chilling injury. In short, both tools drastically reduce the claims at destination that palta or avocado exporters receive from their clients and in doing so, reduce food waste.

Martín Mottura explained the concept of Food Safety and the risk posed by cross contamination, either from the washing water or from the washing machinery itself. In addition, when chlorine-based disinfectants are used in the washing machine, products such as chlorates or perchlorates are usually generated which are potentially harmful to humans. In fact, there is already an MRL for the former and an MRL for the latter is currently being studied.

Therefore, the ideal is that the all-important food safety is attained using a hygienic washing system such as that provided by Citrocide® Palta that “recycles the wash water without cross contamination and without generating harmful disinfection products (DBPs)”.

During the webinar, it was revealed that many of the claims that exporters receive, not at origin but at destination, come from peduncular mold, a problem inherent to the storage and transport of avocados and one that has given rise to numerous claims.

The Citrocide® Palta System is an effective solution which has many advantages over synthetic fungicides, the like of which when used can present a barrier to entry into important consumer markets – given the restrictions on active ingredients and the commercial policy of a large proportion of the distribution market.

“With Citrocide® Palta we obtain an effectiveness of over 90% in the control of peduncular mold and this is achieved without residues”, Mottura stressed, adding that “it is also very important to note that it is a solution certified for organic produce”.

"With Citrocide® Palta we obtain an effectiveness of over 90% in the control of peduncular mold and this is achieved without residues", Mottura stressed, adding that "it is also very important to note that it is a solution certified for organic produce".

A new coating for the avocado

For his part, Raúl Perelló presented the new Citrosol® A K Palta coating that has demonstrated excellent results in the prevention of both chilling injury and weight loss. Perelló demonstrated tests, both in-house and those carried out externally by the Volcani Center in Israel, in which this coating was shown to achieve outstanding results in improving the firmness of the fruit when compared to the control samples, and furthermore, without evidence of color development differences between uncoated and treated produce.

In studies of chilling injury (necrosis), both external and internal, Citrosol® A K Palta manages an 84% reduction and in mitigation of weight loss, this new coating achieves an improvement of 20% -30%. “We improve the firmness throughout the maturation and the commercial life (shelf-life). One marked difference is that after 40 days we maintain higher levels of firmness, meaning that the consumer will have longer to enjoy the avocado”, outlined Perelló.

So, a longer postharvest commercial life without altering the organoleptic properties plus a significant reduction in waste at destination for fruit and vegetable produce. 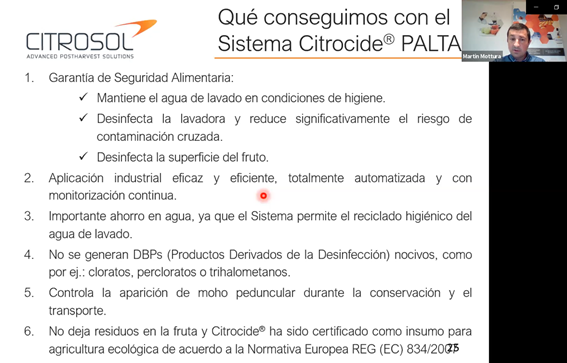 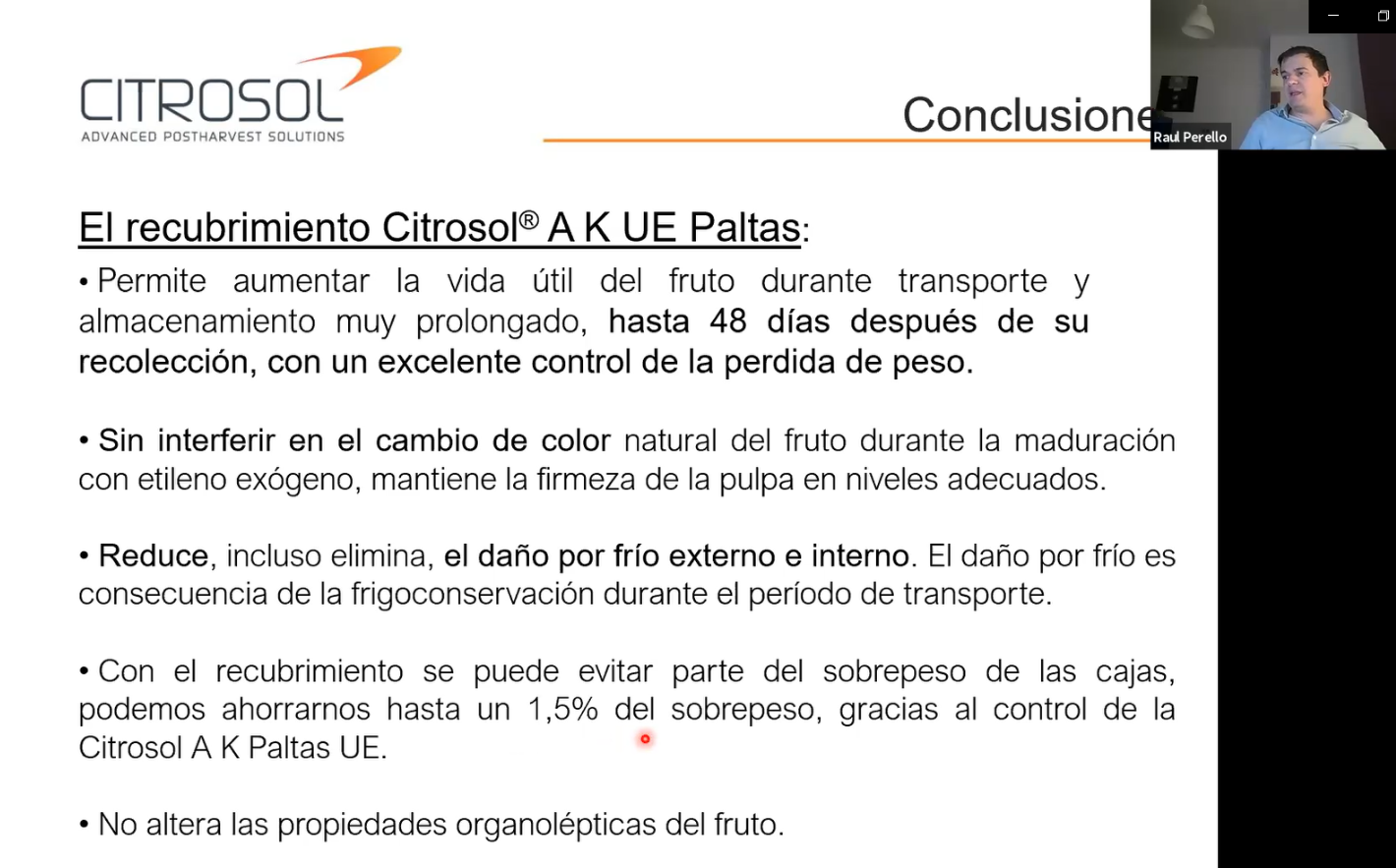