In recent years Citrosol have developed and brought to market various products that substantially extend the shelf life of citrus fruit. Solutions that fully control or substantially mitigate a range of physiological disorders in citrus fruit that become manifest in the form of stains or marks that appear during their postharvest logistics chain. Among those developed are our PLANTSEAL® coatings, plant-based coatings with both ecological and vegan certification and CITROPROTECT®; our product that controls, or mitigates, peel damage and can be applied at the time of the, so-called, 1st treatment.

Citrosol is now pleased to present our new tool that reduces, and, in many cases, eliminates Chilling Injury (CI) peel damage that may appear during or following storage and/or refrigerated transport. The Chilling Injury peel damage become especially relevant where citrus exports between Hemispheres are concerned, in which the fruit is subjected to very low temperatures and, in many cases, quarantine temperatures (1.1-2.2ºC). In Figure 1., one of the most typical symptoms of Chilling Injury peel damage can be seen. Citrosol have been able to improve the formulation of some of its waxes with the extra CI-CONTROL protection that protects against such peel damage.

As can be seen below, CI-CONTROL waxes offer a significant competitive advantage in markets that oblige a reduction in active ingredients.

With our CI-CONTROL coatings, Citrosol have created a new strategy to minimize peel damage caused by CI, offering results similar to those obtained with the active ingredient, Tiabendazole.

Our new CI-CONTROL coatings are specially formulated to improve the protection against CI (Chilling Injury) peel damage. They are CITROSOL waxes carefully reformulated for this purpose. CITROSOL waxes in two forms, our original and the new CI-CONTROL formulations. Currently the coatings that we have improved with CI-Control (CIC) functionality are:

These waxes already substantially reduce peel damage even in their original formulations, but in the new CI-Control formulation they can achieve staining reduction efficacies of 90% or higher as is the case for the plant-based coating, PLANTSEAL® CI-Control. Achieving such high efficacies means the addition of Imazalil or Thiabendazole (TBZ) is now superfluous for this purpose. 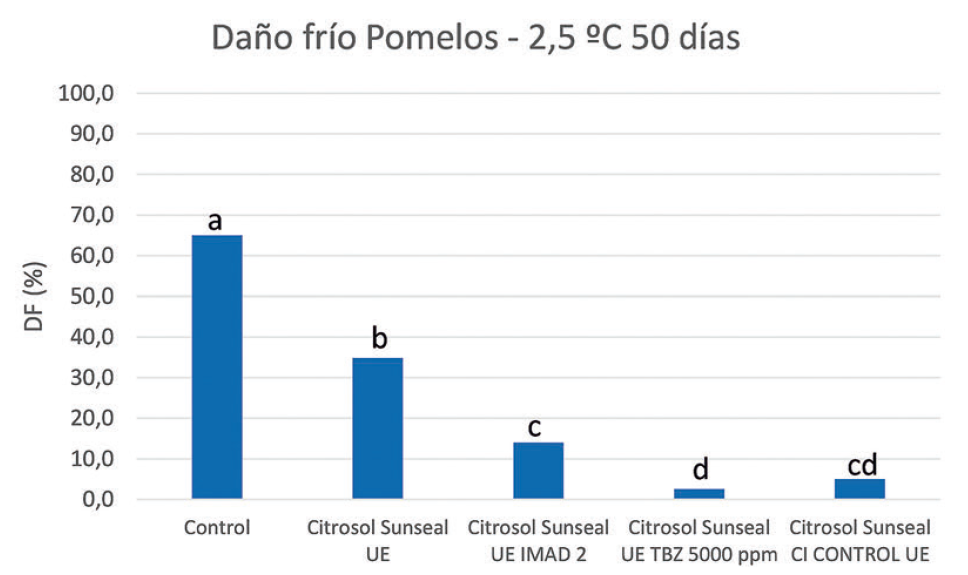 CI-CONTROL coatings have been validated in many long-term refrigerated storage experiments. In Figure 2 it can be seen how Citrosol Sunseal® UE CI-Control protects against peel damage as much as the addition of 5000 ppm TBZ to the original formulation of Citrosol Sunseal® UE. or 2000 ppm of Imazalil.

CI-CONTROL coatings are a huge step forward in the fight to protect and prolong the commercial life of citrus fruit exported between hemispheres and that in cold storage. They mitigate, even eliminate, those tainted by Chilling Injury. It can’t be stressed how important it is that these new coatings are genuine alternatives to the use of active fungicidal materials, such as TBZ.

Over and above the commercial activity that is an integral part of all companies, we, at Citrosol, share our knowledge in a tangible way by publishing our researchers’ papers in prestigious scientific journals worldwide. The latest example is a recent study published in the 'Journal of Plant Science and Phytopathology', authored by Celia Murciano, Jeniffer J. Oliver-Chirito and Benito Orihuel, on the identification of a new pathogen, Cladosporium ramotenellum, currently the cause of significant losses in mandarins being exported from Peru, adding to food waste in citrus produce.

In Colombia, at ‘Territorio Aguacate Medellín 2021’ Citrosol presented its range of ecological solutions to double the commercial life of avocado, using the Citrocide® Palta System and Plantseal® Tropicals. This event added to two other international activities developed by Citrosol in recent weeks, the XX International Peruvian Mango Congress and the Global Citrus Congress, where the Valencian company was engaged as a platinum sponsor.

Jorge Bretó, CEO of Citrosol, in this interview, explains the projects the company is working on and its ambitious goals for the future.

Jorge Bretó has been in charge of Citrosol since the beginning of 2021. However, his experience in the company spans almost 25 years, during which the biologist has passed from an internship contract through progressive positions in which his responsibility has increased. Today, at the head of the leading Spanish company in post-harvest treatments, he is updating us on the progress of the company, the projects that are being worked on and also an ambitious future objective which knows no bounds.